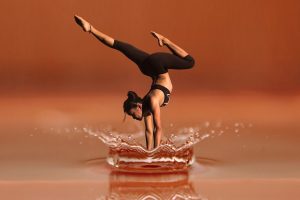 Many Americans are exploring the rhythmic breathing, stretches, and sometimes demanding postures of yoga as a form of alternative medicine. The 2007 National Health Interview Survey found that yoga was one of the most popular types of alternative medicine among adults, and that its use had grown by roughly 3 million people since the previous survey in 2002.

According to the American Yoga Association, yoga unites physical activity, meditation, and controlled breathing. The word “yoga” comes from an ancient phrase meaning “to join,” which refers to the mind and body coming together. The first written instructions regarding yoga poses date back to more than 2,000 years ago, but yoga is thought to have been practiced centuries before then.

The type of yoga practiced most often in the United States is Hatha yoga, which emphasizes particular poses while paying careful attention to breathing techniques. There are more than 100 other different schools of yoga, which originated in Indian philosophy. These various schools incorporate some or all of the eight foundations, or limbs, of yoga practice.

According to the National Center for Complementary and Alternative Medicine, yoga’s benefits as a form of alternative medicine may include:

In addition, researchers are examining the use of yoga to help treat a number of specific conditions.

Physical and Emotional Benefits of Yoga

Yoga views the body as the most important tool humans have, one that should be treated with the utmost care and respect. The following are just a few of the possible ways that yoga may improve your overall health:

The Risks of Yoga

If you’re considering yoga, keep in mind that certain yoga poses may not be appropriate for people with particular medical conditions including:

If you have any underlying health problems, discuss the possible risks of yoga with your doctor beforehand. Also, make sure you know the demands a particular class will place on your body before you enroll. If you do take a class, inform your yoga instructor of any health concerns that may affect your ability to perform certain poses.