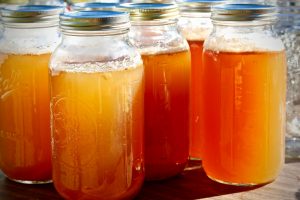 What is apple cider vinegar?

Apple cider vinegar is made by fermenting the sugars from apples which turns them into acetic acid – the active ingredient in vinegar. In the shops you may see apple cider vinegar labelled as ‘filtered’ (a clear liquid), or unfiltered – the latter containing something known as ‘mother’. This means there are proteins, enzymes and friendly bacteria present, and gives this type of vinegar a cloudy appearance. Other fruits may be used to create flavoured cider vinegar – the base of the vinegar will usually be apple with fruits, such as raspberries, added during manufacture.

Apple cider vinegar doesn’t really contain any vitamins or minerals, other than a very small amount of potassium, calcium and magnesium. There isn’t enough research at the moment to demonstrate that buying the ‘mother’ variety is any better for you than buying filtered. However, apple cider vinegar does also contain amino acids and antioxidants.

How can you use apple cider vinegar?

Apple cider vinegar can be incorporated into cooking or used in salad dressings.

If choosing to drink apple cider vinegar, make sure that it is sufficiently diluted – it is too acidic to drink straight. Given that it’s a traditional remedy and not a medicine, there are no official guidelines on how to consume it. Some people choose to stir between 1 tsp – 2 tbsp of apple cider vinegar into a glass of water.

What are the top 5 benefits of apple cider vinegar?

There is currently no specific evidence to support the efficacy of the ACV diet, however, there are some interesting studies which assess the potential dietary effects of vinegar. However, it should be noted that some of these findings are based on animal studies only.

To date, the evidence of ACV’s use as a means of aiding blood sugar management is the most impressive of all its claims. A number of studies have suggested that as part of a meal containing carbohydrate, vinegar may improve post-prandial glucose and insulin levels. Its method of action is thought to be similar to that of the blood sugar lowering drug, metformin. Another study examining the consumption of 2 tbsp of ACV at bedtime found improved glucose levels on waking. It’s worth noting, however, that the success of ACV in this area appears to be most relevant for healthy individuals or diabetics with well-controlled blood sugar levels.

Moreover, if you take prescription medication to help manage your blood sugar, you should check with your GP before you increasing the intake of any form of vinegar.

Some human studies have reported positive effects of ACV on feelings of fullness and helping to lower calorie intake. This combined with balancing blood sugar and reducing insulin levels may explain its perceived effects on weight. For example, a study which examined the impact of adding vinegar to a meal based on white bread found the people in the study experienced better satiety and reduced blood glucose and insulin responses. A further study which involved the consumption of 2 tbsp of ACV combined with a 250kcal energy deficit appeared to reduce weight, BMI and hip circumference. That said, the evidence supporting ACV as an effective weight loss tool remains low and it could be argued that its too early to draw conclusions.

In animal studies acetic acid has been seen to reduce the accumulation of body fat. The same was seen in a 12 week study of obese men. The men consumed an acetic acid-rich vinegar and were seen to experience a reduction in body weight, BMI, visceral fat, waist circumference and blood triglyceride levels. Findings look promising, but more research is needed.

Animal studies suggest ACV may improve blood triglycerides, cholesterol and blood pressure. Sadly, however, this has not to date, been sufficiently replicated in humans to support its recommendation.

5. May act as an anti-microbial

Traditionally used for cleaning the home and as a food preservative, vinegar does have anti-microbial properties. Specifically, ACV may be affective in inhibiting the growth of escherichia coli, staphylococcus aureus and candida albicans.

Are there risks to taking apple cider vinegar?

It is important to note that as apple cider vinegar is a traditional remedy and not a medicine, there are no official guidelines for how to take it. There is also limited data available for the effects of long-term use or consumption of large quantities of apple cider vinegar.

The potential lowering of blood sugars could be problematic for diabetics, including those who use insulin, and it may reduce potassium levels in the body. For the same reason, apple cider vinegar is best avoided if you are taking any diuretic medication or water pills.

For those suffering with gastroparesis or delayed gastric emptying, where the movement of food between the stomach and small intestine is slowed, apple cider vinegar may make the symptoms worse and should be avoided.

There is also a concern that acidic drinks, such as apple cider vinegar, may cause damage to tooth enamel. As a precaution, it is a good idea to dilute apple cider vinegar appropriately, never consume it neat, and don’t sip throughout the day. It may also help to rinse the mouth with fresh water after consuming apple cider vinegar. Check with your dentist if you are concerned.