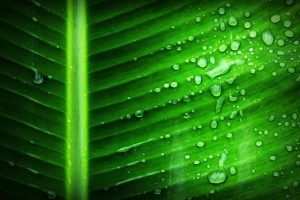 Chlorophyll is the natural compound present in green plants that gives them their color. It helps plants to absorb energy from the sun as they undergo the process of photosynthesis. This nutrient is present in green vegetables and other plant-based foods, like algae. The greener the vegetable is, the higher its chlorophyll content.

There are two types of chlorophyll in plants: chlorophyll a and chlorophyll b. All plants contain either one of these two varieties. They are both fat-soluble compounds that have antioxidant properties.

When you ingest chlorophyll, it moves around your body in micelles, which are molecular groups that contain fat. Even though research hasn’t been able to prove what minimum amount of fat is needed to metabolize chlorophyll, it’s thought that small amounts of healthy fats can help the body process it during meals.

The benefits of chlorophyll on the human body are still in the early stages of investigation. However, research has already found that this compound does indeed provide certain health benefits.

Studies in rodents show that chlorophyll can reduce the occurrence of cancerous tumors. It was found that chlorophyll can form close bonds to carcinogenic chemicals called aflatoxins. When they bind, the chlorophyll helps to block the absorption of the aflatoxins (cancer-causing agents) in the intestines. Additional studies in humans are needed to support these findings.

Chlorophyll also helps to prevent damage done to genes by harmful aflatoxins. Scientists are studying the effects of chlorophyll intake when it comes to liver, skin, stomach, and colon cancers. It’s important to note that this research is on chlorophyllin and not natural chlorophyll. This is so that the dosage can be monitored more accurately.

Research in early studies on humans shows that taking 100-milligram doses of chlorophyllin three times a day for four months decreased aflatoxin damage to DNA by up to 55%. Other studies show that there is a connection between eating vegetables and cancer protection. The higher your daily intake of green vegetables is, your body has a better effect of cancer prevention.

Chlorophyll has antioxidant properties, even though they’re not as strong as those found in other nutrients like vitamins C and E. Some studies show that regular intake of leafy, green vegetables helps to increase antioxidants in the bloodstream.

Limited studies show that chlorophyll may also decrease oxidative damage done by harmful carcinogens. So far, these studies have only been tested on animals and await human trials.

Natural chlorophyll has no known side effects and so far only has benefits for humans. However, chlorophyllin as a supplement may have some possible side effects that you should consider such as:

It’s also important to note that the safety of taking chlorophyllin has not yet been studied in women who are pregnant or breastfeeding. These women should not take a chlorophyllin supplement until further research has been carried out.

Spinach has a high chlorophyll concentration, with around 24 milligrams per one-cup serving. This vegetable is easy to prepare, as you can eat it raw or cooked in different ways. Other leafy greens have between 4-15 milligrams of chlorophyll per raw serving. These include:

Other green vegetables are good sources of chlorophyll, which also contain up to 15 milligrams per serving. These include:

Small amounts of chlorophyll are present in green fruits like kiwi and green grapes. There is also a small chlorophyllic concentration in green nuts and seeds, like pistachios.